The New Covenant Church (NCC), Ijokodo, Ibadan nestles on an expanse of greenery  uncommon for a place of worship in the ancient city. There, on Saturday, 30th September  2017, the Richard Coker Foundation conducted an awareness seminar on Sickle Cell Disorder  (SCD).

It had rained for several days consecutively and that Saturday was no exception. Yet the  parishioners braved the rain and the resulting cold drought to attend an enlightenment talk on  a condition better known by its myths than by its realities.

Many have had direct interaction with SCD if not in their nuclear but certainly in their  extended families – often times in both. The seminar was billed to last 90 minutes but in the  end it lasted over three hours.

It was the annual NCC women’s conference, where a health talk on topical health conditions is  the norm. President of the Covenant Women, Ijokodo Conference, Mrs. Asaolu commended  RCF for the seminar and enjoined attendees to pass insights gained on SCD to their respective  families and communities. 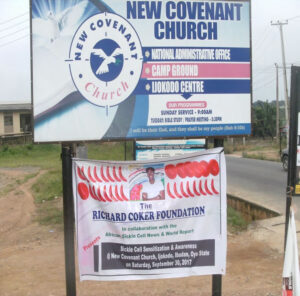